Don't Miss
Home / From the Press / Sri Lanka on verge of economic collapse – An appeal to union activists, students and workers

Sri Lanka on verge of economic collapse – An appeal to union activists, students and workers

Posted by: dhammika in From the Press February 23, 2022 Comments Off on Sri Lanka on verge of economic collapse – An appeal to union activists, students and workers 218 Views

The Sri Lankan economy is at near collapse. Workers and the poor are asked to pay for this crisis. They face increased employment and increased prices of all essential goods. The government is increasingly dictatorial and beginning to attack public services. The United Socialist Party (USP), the Sri Lankan section of CWI, is launching a campaign to build mass opposition. Below is the appeal from the USP.

The near economic collapse faced by Sri Lanka – An appeal to union activists, students, and workers

Sri Lanka is on the verge of economic collapse. Rajapaksa’s government and the capitalist class do not see any way out of the crisis as they limit their solution within the narrow framework of capitalism.

Attacking the wages and conditions of workers and farmers, cutting public services, or selling the part of the country to the lenders, is not the solution. This will only further make the crisis worse. The mass of the population is facing acute food shortages in addition to the health crisis. Over half a million people are pushed back into poverty in the last years alone.

The government’s focus is to find a way to defend the profit of a tiny minority of capitalists and to repay the enormous debt that it has accumulated. Workers, farmers, students, and all oppressed people in Sri Lanka, are not responsible for the crisis and should not be asked to pay for it. Instead of emergency economic action plan needs to be implemented.

The current government or any other establishment parties will never fully implement such a programme. Some temporary and limited concessions could be made to pacify the opposition. But it will not be enough to meet the needs of tens of thousands. Establishment parties may have a difference in terms of who should be the lenders but they all are united in agreeing on deep-diving into the debt trap by borrowing more and more. There is no alternative opposition that exists.

We also reject the bogus promises of recovery. All sections of the establishment are just selling empty hopes based on imaginary development that would take place in the future. But a whole generation is shattered by economic and health crises.

In addition, the current dictatorial government is on the offensive against all democratic rights. They are also brutally suppressing any meaningful opposition that could emerge. There is an increase in the repression of political activists and trade unionists. The use of the military in public activities is on the increase. The regime is bent on strengthening the hated Prevention of Terrorism Act (PTA) in the guise of amending it. We demand it to be completely abolished.

The political establishment will unite together with the minority capitalist to make sure that they do not lose their profit or their power. They will also use every division that exists in society to maintain control. The current government promotes communal propaganda and attacks against Tamils and Muslims.

We must come forward to build our strength.

We appeal to all the union and students bodies and socialist organisations to come forward to agree on building mass oppositions that include Tamils, Muslims and plantation workers. We must unite together on some basic program including the demand outlined above.

We appeal to all workers and students to form their committees in the workplaces,  colleges, and universities, and local communities to mobilise mass opposition. Form a national assembly consisting of rank and file trade union activists and socialist organisations and other activists to prepare for the struggle. 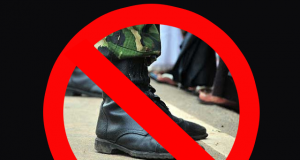